Press: 50 UNDER 50: THE NEXT MOST COLLECTIBLE ARTISTS 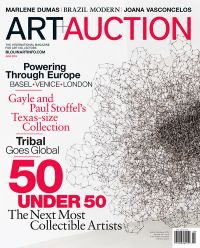 and a growing market are a few of the factors

that helped ART+AUCTION identify this crop of artists coming into their own.

Gharem is not only a central figure in the isolated, rapidly changing, contemporary Saudi art community but also the highest-selling living Persian Gulf artist. He has held this position since 2011, when his copper-and-wood Message/ Messenger, 2010, sold for more than $800,000 at Christie’s Dubai. His day job as a lieutenant colonel in the Saudi army might provide fodder for the bureaucratic nature of his performances, site-specific installations, and paintings, which are largely done as calligraphic rubber stamps. As a cultural activist, Gharem is helping grow the Gulf’s art world infrastructure through his contributions to the nonprofit Edge of Arabia exhibitions. His work is held by the Victoria and Albert Museum, the British Museum, the François Pinault Collection, and the Los Angeles County Museum of Art, and in October he will have his first outing at Edge of Arabia in London, in cooperation with Ayyam Gallery, and Side by Side Gallery Akim Monet—Sehba Mohammad